and so on is a software functionality that suggests you alternatives to or makes automatic corrections of the text you have typed in. The concept of correcting typed text dates back to the 1960s, when a computer scientist named Warren Teitelman who also invented the "undo" command came up with a philosophy of computing called D.W.I.M., or "Do What I Mean." Rather than programming computers to accept only perfectly formatted instructions, Teitelman said we should program them to recognize obvious mistakes.

There are few ways how spell correction can be done, but the important thing is that there is no purely programmatic way which will convert your mistyped "ipone" into "iphone" (at least with decent quality). Mostly there has to be a data set the system is based on. The data set can be:

Manticore provides commands CALL QSUGGEST and CALL SUGGEST that can be used for the purpose of automatic spell correction.

They are both available via SQL only and the general syntax is:

If the first parameter is not a single word, but multiple, then:

That's the only difference between them. Several options are supported for customization:

To show how it works let's create an index and add few documents into it.

As you can see we have a mistype in "crossbUdy" which gets corrected to the "crossbody". In addition to that by default CALL SUGGEST/QSUGGEST return:

To disable these stats display you can use option 0 as result_stats.

If the first parameter is not a single word, but multiple, then CALL SUGGEST will return suggestions only for the first word.

If the first parameter is not a single word, but multiple, then CALL SUGGEST will return suggestions only for the last word.

Using 1 as result_line in the options turns on alternate mode to display the data by returning all suggests, distances and docs each per one row.

This interactive course demonstrates online how it works on a web page and provides different examples. 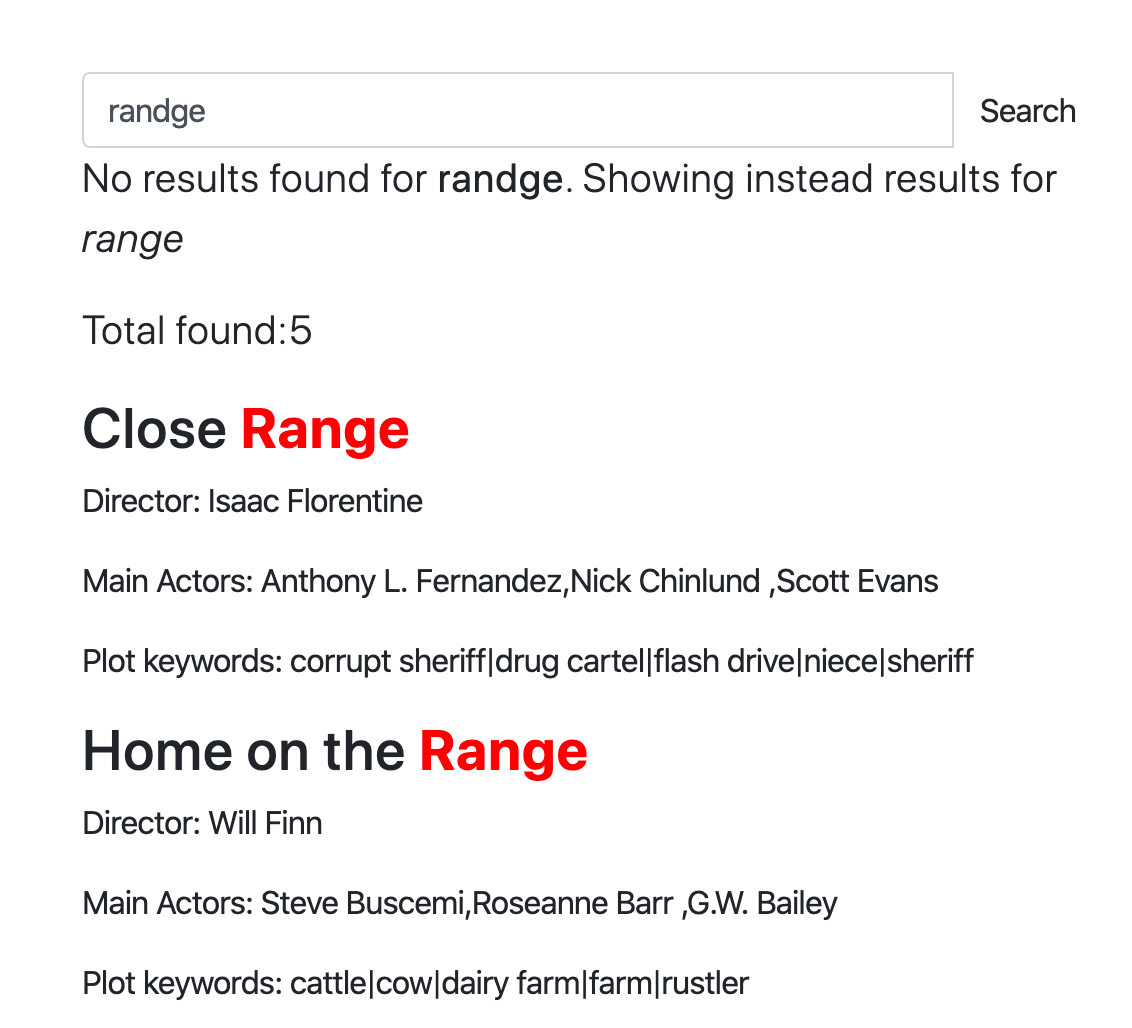 Query cache stores a compressed result set in memory, and then reuses it for subsequent queries where possible. You can configure it using the following directives:

These settings can be changed on the fly using the SET GLOBAL statement:

These changes are applied immediately, and the cached result sets that no longer satisfy the constraints are immediately discarded. When reducing the cache size on the fly, MRU (most recently used) result sets win.

Query cache works as follows. When it's enabled, every full-text search result gets completely stored in memory. That happens after full-text matching, filtering, and ranking, so basically we store total_found {docid,weight} pairs. Compressed matches can consume anywhere from 2 bytes to 12 bytes per match on average, mostly depending on the deltas between the subsequent docids. Once the query completes, we check the wall time and size thresholds, and either save that compressed result set for reuse, or discard it.

Note how the query cache impact on RAM is thus not limited by qcache_max_bytes! If you run, say, 10 concurrent queries, each of them matching upto 1M matches (after filters), then the peak temporary RAM use will be in the 40 MB to 240 MB range, even if in the end the queries are quick enough and do not get cached.

Queries can then use cache when the index, the full-text query (ie.MATCH() contents), and the ranker are all a match, and filters are compatible. Meaning:

Cache entries expire with TTL, and also get invalidated on index rotation, or on TRUNCATE, or on ATTACH. Note that at the moment entries are not invalidated on arbitrary RT index writes! So a cached query might be returning older results for the duration of its TTL.

Current cache status can be inspected with in SHOW STATUS through the qcache_XXX variables:

Collations essentially affect the string attribute comparisons. They specify both the character set encoding and the strategy that Manticore uses to compare strings when doing ORDER BY or GROUP BY with a string attribute involved.

String attributes are stored as is when indexing, and no character set or language information is attached to them. That's okay as long as Manticore only needs to store and return the strings to the calling application verbatim. But when you ask Manticore to sort by a string value, that request immediately becomes quite ambiguous.

First, single-byte (ASCII, or ISO-8859-1, or Windows-1251) strings need to be processed differently that the UTF-8 ones that may encode every character with a variable number of bytes. So we need to know what is the character set type to interpret the raw bytes as meaningful characters properly.

Second, we additionally need to know the language-specific string sorting rules. For instance, when sorting according to US rules in en_US locale, the accented character ï (small letter i with diaeresis) should be placed somewhere after z. However, when sorting with French rules and fr_FR locale in mind, it should be placed between i and j. And some other set of rules might choose to ignore accents at all, allowing ï and i to be mixed arbitrarily.

Collations combine all of the above: the character set, the language rules, and the case sensitivity. Manticore currently provides the following four collations.

The first two collations rely on several standard C library (libc) calls and can thus support any locale that is installed on your system. They provide case-insensitive (_ci) and case-sensitive (_cs) comparisons respectively. By default they will use C locale, effectively resorting to bytewise comparisons. To change that, you need to specify a different available locale using collation_libc_locale directive. The list of locales available on your system can usually be obtained with the locale command:

The specific list of the system locales may vary. Consult your OS documentation to install additional needed locales.

utf8_general_ci and binary locales are built-in into Manticore. The first one is a generic collation for UTF-8 data (without any so-called language tailoring); it should behave similar to utf8_general_ci collation in MySQL. The second one is a simple bytewise comparison.

Collation can be overridden via SQL on a per-session basis using SET collation_connection statement. All subsequent SQL queries will use this collation. Otherwise all queries will use the server default collation or as specified in collation_server configuration directive. Manticore currently defaults to libc_ci collation.

Collations affect all string attribute comparisons, including those within ORDER BY and GROUP BY, so differently ordered or grouped results can be returned depending on the collation chosen. Note that collations don't affect full-text searching, for that use charset_table